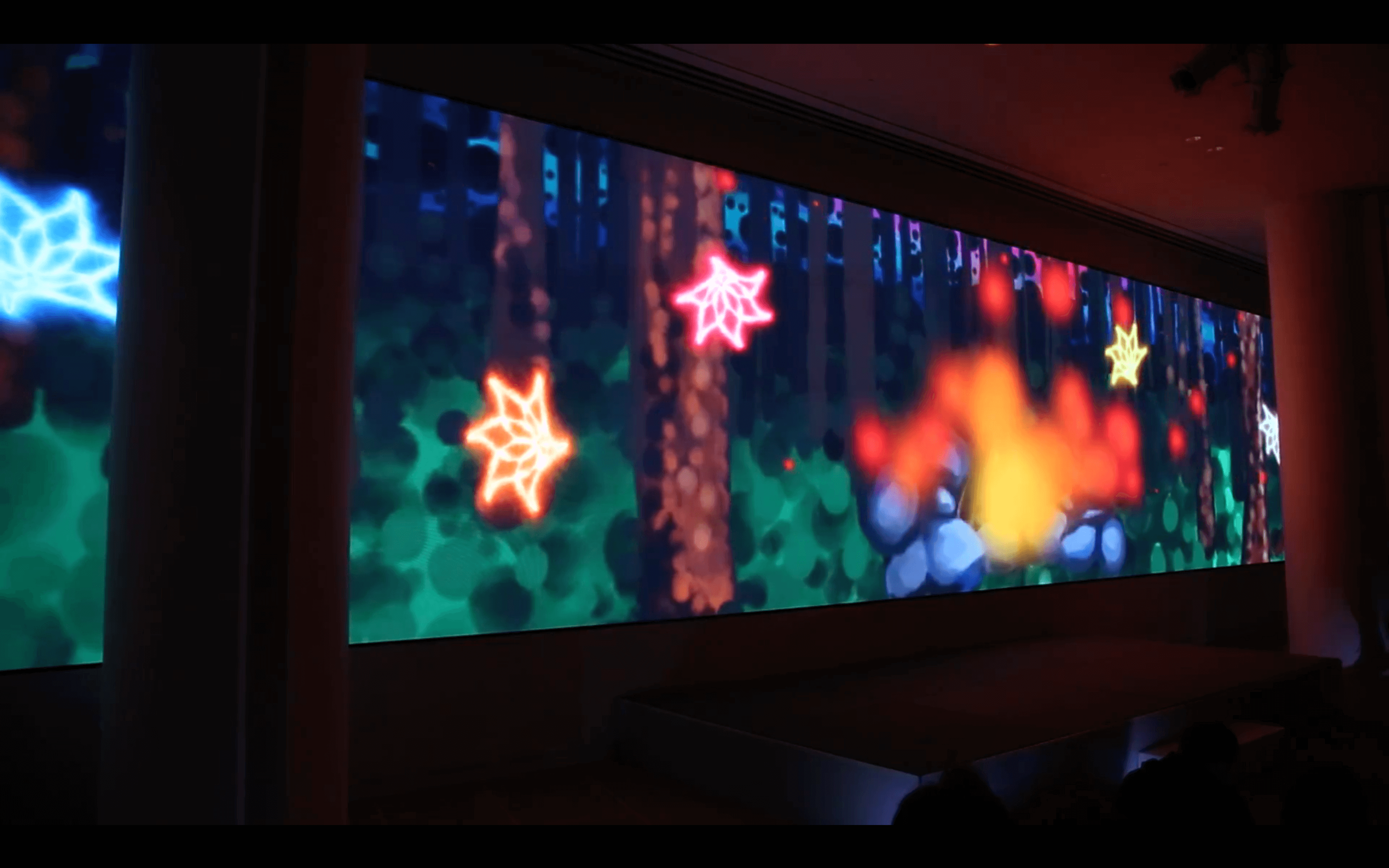 A social experience that transforms space and explores person to person interaction by asking people to form connections and accomplish tasks as groups.

Bonfire is a 10 to 20-minute long social experience that transforms a public space into an immersive campfire event aiming to facilitate bonds among strangers. The huge bonfire on the 120-foot-long screen not only set the tone and created this atmosphere at the venue but also symbolized the connection that was being formed through the interactions.

Our core principle is to facilitate bonds among strangers. How to transform a space into somewhere that fosters connections, engages the crowd, and generates this warm sentimental feeling that we often have when we sit around a bonfire feeling bonded? How to present something so human with cold technology? Is it even possible?

As one of our most fundamental goals was to explore how to truly engage people with technology and transform this passive watching large screens cinema-like experience into an interactive experience, we thought these are the reasons why we believed the audience would want to engagement in this experience we were trying to create.

We spent a few weeks trying to come up with the most compelling and engaging experience for our audience that we could create with the large screen technology that transforms a public place. We kept refining our ideas for the interaction by getting feedbacks on the overall experience design and technical feasibilities through playtests and from various people and experts, and thinking through lists of questions we were interested in.

Some of our main considerations are:

- Give participants a preview/indication of what activity will be like

- Give some guidance while also maintaining points of discovery

We also did a playtest with our chatroom prototype to see if people enjoy finding each other in cowd through their own creativity. We observed their facial expressions and interviewed them afterwards about how they felt to see if our goal was achieved, is there any form of bonds that was formed primarily - and we succeeded.

A Walkthrough of the Experience.

After our first playtest I started working on the communication of the chatroom and Unity.

Then I started developing and designing the UI after deciding on the font with my team.

One thing that was bothering us was that the performance on Chrome and Safari were different. With Chrome it performed exactly the way we wanted, because I kept testing in Chrome when I was developing it. But in Safari, when the keyboard was activated it pushed up the whole screen, so if the user did not scroll up then the prompt would seem like it disappeared.

After doing a lot of research and trying to fix it, it was still in vain. I tried to work around it, having <p> stack from top or from the bottom. Adjusting the timing of the prompt and the hint, and their positions respectively.

Eventually, we decided to leave it as the way it first was but adjusted the timing of when the hint appears so the user would still be able to see the prompt and the hint at the beginning and once they started typing, all the rows of the text that everyone in the chatroom send would still be in the view without scrolling.

Check out our codes for web sockets and Unity!

Human Dynamic Could be the Hardest Thing to Design.

Our show at West Chelsea in December 2019 was a success. Some people told us they got to make new friends and even added each other on Facebook. Some told us it was their favorite projects among all the other in the Big Screens Show 2019 as we were thinking the hardest on the interaction element, attempting on creating a meaningful social experience rather than a passive viewing experience.

Expect it to be a mess, and design around that.

was a very powerful advice we got from Mimi Yin, an artist and designer, as we consulted and getting feedback from her on our experience and technology feasibility. That was very impactful on me, cause at the beginning we were trying very hard on designing every details and wanting everything to go perfectly. However, what she told us was that "Don't try to manage everything and think that it would work perfectly. It will be a mess. Expect it to be a mess, and design around that. That was how we got to think more realistically and started to let go more stuff and let it be an experience itself as it flew.

The biggest caveat was that due to the time limitation we were not able to develop more interaction between screen (big screens) to screen (smartphone screens). If there were more time, having what was marked as skipped in our walkthrough of experience would help foster more interaction between the audience and the screen. Yet, we still would have to think hard on how to direct the attentions of our audience, from the small screens to the big screens eventually to off screen while building bonds with each other, and how to or whether to redirect their attention back to the small screens or the big screens.